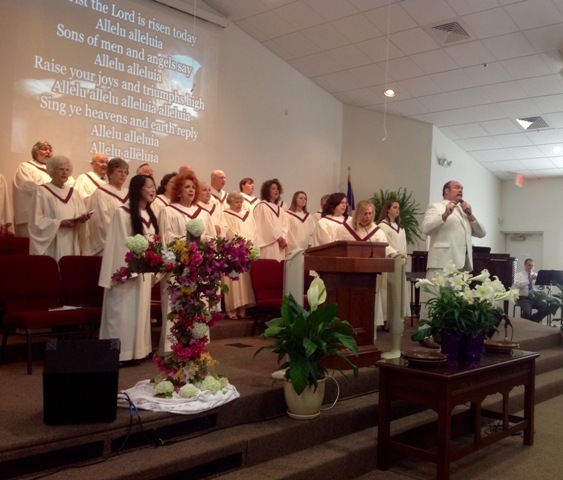 Mark your calendars Ivan Parker will be at SRFBC on  July 1, 2018 During our Morning Service 10:45am. Invite your family, friends, and neighbors to this free event, we will have a loving offering during the concert. Doors will open at 10am.

So who is Ivan Parker?

Ivan was saved at age 9 in his daddy’s church in Sanford, North Carolina when an evangelist preached a fiery sermon on the rapture of the church and  heaven. "I remember that night well," he said. "I was  sitting on the back row with all my friends. When the invitation was given, I   couldn’t get to the altar fast enough. My mom and dad had always told me that whenever it came to salvation, I couldn’t get to heaven on their  experience -  I had to have my own."

This decision that Ivan made at age 9 stayed in the forefront of his mind, even though he  admits that he made a lot of mistakes along the way. "But I knew Jesus loved me and had His hand on me. I didn’t know what God had planned for my life; I just knew I wanted to sing."

Ivan Parker was raised in Sanford, North Carolina, where his father was a pastor in a Pentecostal church. In 1982, Parker joined the Singing Americans, and in 1983 he became lead  vocalist of the Dove Award-winning group the Gold City Quartet. As a member of Gold City, he was named Favorite Lead Vocalist by Singing News from 1988–1993, and was named Favorite Male  Vocalist from 1989–1995 and 1997. He was inducted into the Alabama Music Hall of Fame in 1993  In January 1994, Parker began recording as a solo artist, and in 1995 he joined Bill and  Gloria Gaither in "Homecoming" tour. Occasionally, he would sing with tenor Kirk Talley, and pianist/baritone Anthony Burger in a group they called simply, "The Trio." He has released 13 solo albums. From 2001-2004 and 2006, The Singing News named him Favorite Soloist. In 2007 and 2008, he was voted Male Vocalist of the Year in the Singing News Fan Awards.   In 2008, Ivan recorded a very special song entitled "I Choose" which topped the charts at the number #1 position. This message became universal for Ivan and his audience as the lyrics of hope and encouragement rang out to a hurting world that they have the power to choose life over death, joy over sorrow and faith over hopelessness. "The choice we have to follow God in the good times and the bad is easy once we make the decision to simply chose God."  The same message is echoed in Ivan's Signature Song, "Midnight Cry." He remembers the incredible feeling he had the first time he heard the song. "I just could not get away from the  message in the song. It meant a lot to me, because it was the message that tugged at my heart the night I gave my heart to the Lord”. You don’t want to miss Ivan Parker, what a blessing he will be to us! Questions see Bro. Rick Kelly.